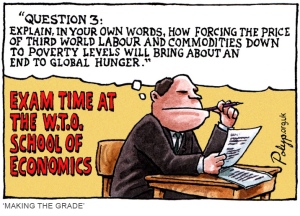 There are a variety of contemporary ideological positions used to justify whittling down the welfare state, including market libertarianism, Reaganomics, Randism, Blairite ‘meritocracy’, and so forth. Some of these positions seek recourse to dubious economic ‘science’ (such as the Laffer Curve), whilst others are based on the distorted readings of Nietzsche or Darwin by adolescents. What all tend to have in common, however, is the notion that for the state to assist those in a position of weakness is, in essence, to encourage weakness. The rhetoric of neoliberalism does not pose attacks on the welfare state as the economic elites having won the class war and having their way with political economy, but rather, tries to argue that such attacks are for the benefit of the poor as well. These arguments, and the policies that they support, are often reviled as discredited nonsense, but they persist, nonetheless.

Now, let us return to psychoanalysis for a moment. The primary gain of a symptom, in psychoanalytic terms, at least, is the jouissance attached to it. Relatively late in his life, Freud argued that in addition to the primary gain, there could be multiple other motivations for this or that symptom. He gives the example of a woman, ‘subjugated’ by her husband, whose illness temporarily suspends a difficult situation by garnering sympathy from the said husband.  In this example, the sympathy received may be an added incentive for the woman to become ‘ill’, but addressing this is not the principal goal of psychoanalytic treatment, since such motivations are, by definition, secondary.

In a gross perversion of Freud’s teachings, the primary and secondary gains have been turned on their head, with the amelioration of the secondary gain being the primary goal of much psychiatric and psychological treatment. The care of professionals is itself regarded as a secondary gain, and therefore as something to be withheld, reduced in length and intensity, or made conditional upon various compliance measures. The subject presenting with a complaint is frequently regarded, especially in public health, as an ‘attention seeker’, and consequently, as somebody to be turned away. A good patient is a lifter, not a leaner, to borrow an expression from Federal Treasurer Joe Hockey. The notion that a human being could be implicated in her own suffering, or even unconsciously cause it, without such suffering being a mere confidence trick – an idea that was self-evident to 19th Century poets and philosophers – has not made any headway in mainstream mental health. This latter discipline resembles the neoclassicals of that other dismal science, economics, for whom all motivation is extrinsic.

Thus, clinicians seek to abolish the secondary gains of ‘illness’ in a variety of conditions, from chronic pain, to depression, to the so-called personality disorders. And since professional care and treatment is itself construed as such a gain, the DBT clinician, for instance, is licensed to not bother listening to the patient who has self-harmed. A ‘case manager’ is free to respond to a suicidal patient’s ‘secondary gain’ and ‘manipulative intentions’ – for these are now the same thing – by being ‘uninvolved’ and ‘unavailable’ to a patient. After all, to assist a person in a position of weakness is, in essence, to encourage weakness.

In short, what is regarded as self-interested, radically conservative, ideological garbage in the realm of political economy is embraced without criticism in those other dismal ‘sciences’ of today, which, all too often, are at one with the political ideologues, but who operate at the level of the individual ‘case’.